Dr. Patrick J Casey began his journey towards discovering Chaperonze when he was just a little boy in New Zealand. It was a family tradition to go to the horse races while he was growing up and he was interested, not only in the horses, but also in whom their parents were and the common traits between them. He was a keen animal lover and wanted to become a veterinarian from the age of four.

In 1989, at the age of 21, and after graduating from Veterinary school, he was offered an internship in Equine Surgery at the best Veterinary practice in the world, Hagyard, Davidson and McGee (now Hagyard Institute), which is located in Lexington, Kentucky. On his third day in Lexington, he visited a breeding farm to see the grandfather of a stallion he had followed for many years at the races in New Zealand. That day, he met Dr. Umphenour, who became a friend of 30 years and one of the non-clinical subjects, being treated with Chaperonze.

After Kentucky, Dr. Casey was selected to do his Clinical Residency in Equine Reproduction at the University of California, Davis. He immediately began his research into stallions, which carries on until today. The major questions of male fertility still remain:

Through the years, cutting edge ways to measure fertility were invented and this allowed for the determination of cause.

Dr. Casey’s research group was the first to determine that the Growth Hormone (GH) axis was a key factor in male fertility/subfertility in all mammals. They were the first to establish treatment protocols to manipulate this axis and have had quite a lot of success in treating males this way. This has, in fact, become a large area of medicine in the world. Dr Umphenour and Rich Decker helped Dr. Casey to successfully treat some high profile stallions in Kentucky (nowadays, it is no longer allowed to use GH in horses, clinically). They were met, however, with a group of stallions that would not respond, clinically, to GH. This puzzled Dr. Casey and triggered his curiosity.


With the advent of cell culture in a test tube that came about from the late 1950s, it was believed that once a cell had been “released” from the constricture or encapsulation of an organ, that it would divide. This was soundly based on the fact that as cells within organs encounter this constricture in a developing embryo/fetus, they stop dividing. To the dismay of scientists, cellular division did not occur and, in fact, the cells that were put into cell culture would live quite “happily”, but would not divide. Dr. Casey wondered about the possible reasons behind this and the question that lingered in his mind was “did the cells feel they had no need to divide?”

Cell division is a vital biological process and Dr. Casey had been studying it through his research on how testicles divide to produce new sperm. The interesting thing with this specific process was that the sperm-making system had an opening from which new sperm was released, hence, no constricture. Dr. Casey wondered if the cells continued to divide because they had never been biologically “told” to stop.

How do you then tell a cell that has stopped dividing (like a tendon cell or a heart cell) that it can start again?

Dr. Casey found the answer through looking around at his environment. Biologic systems show regrowth after they have received an insult. A few examples of this phenomenon are pruning roses, tree regrowth after a wild fire, and altitude training. This discovery led to Dr. Casey’s patent Method for Growing Adult Cells, which can be viewed by clicking on the following link https://patents.google.com/patent/US8372644.

Once a cell’s very mortality is threatened, that signals it to start dividing. Moreover, these cells behave as if they are brand new cells. The question becomes, how is this possible?

The answer lies within the cell. The proteins that actively regulate the cell and eliminate cellular waste are lost with age. These proteins are called Chaperone Proteins (CP). The new cells that are grown in-vitro are actually packed with CP.


AS CP are lost with age, our cells become more and more packed with “junk protein” as we get older. CP are also the free radical scavengers within the cell, resulting in an increase of free radicals as well (for a more detailed explanation, please click on Understanding the Biology ). The cell’s ability to make new proteins is impeded by the fact that it contains too much “junk”. The cell’s DNA has not changed, but its message cannot be translated into a protein because the system has dramatically slowed down.

Dr. Casey thought about the stallions that were unresponsive to GH in old age. Hormones are made from proteins. These horses must have been unable to respond to the GH because their cells were too clogged with junk.

The question in Dr. Casey’s mind became “how do we get rid of some of the “cellular junk” in order to allow a cell to make more proteins?”

It was obvious to him that the answer lay with Chaperone Proteins and, so, Dr. Casey defined four steps that he would need to accomplish, as described below. He had two specific treatment modalities in mind: anti-aging for general health and specific treatments of severe cellular dysfunction.


The two treatment modalities are detailed as follows: 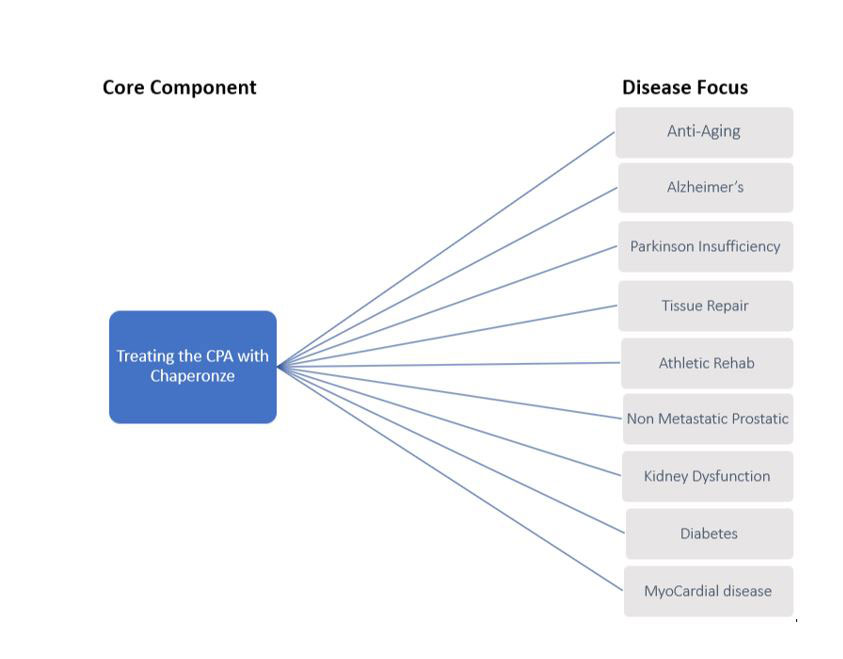 Dr. Casey and his team have shown that aiding the Chaperone Axis inside the cell can lead to an improvement in the GH axis. The cells of the stallions that were unresponsive to GH actually began to transcribe the DNA message and make the proteins (translation), just as they did when they were younger. Their cellular age was reversed.